By Blade And Cloth

I am, finally, in the process of making a last revision on this story, and bringing it one step closer to publication. The basic story will not be changed, but there will be some significant improvements to the prose. I intend to publish it first on Kindle, then in print and on other e-publication sites. At that time this version will be deleted.

It's my intention to start publishing the Wizardland stories this year. Yes, there is far more than just Songless Bard and Talaski the Starred. There is a very large epic which I have described as being "of the length and breadth of Lord of the Rings." (For some reason this has angered people, and I don't know why. I don't claim that The Master of Paths is as good as the Lord of the Rings, or as deep, or set in a similar world, just that it will take up several books and cover a lot of geography in the world. On the other hand, I predict it to be much shorter than the Wheel of Time series.)

Thank you for reading.
Posted by Dragonwriter at 10:10 AM No comments:


Have you ever wonder how Silent Monks might sing the Halleluia Chorus? From the entries on You tube, this skit has been around for a few years, but this is one of the best film versions of it.
Posted by Dragonwriter at 9:25 AM No comments: 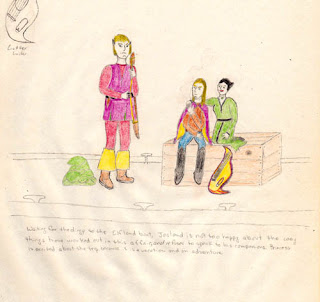 Come one, come all to the new serialized story, Talaski the Starred. This is the grand adventure of a Gutter Rat who is caught by a wizard, and then discovers love, wealth, giant spiders...

You can find it at www.talaski.blogspot.com

Helen
Posted by Dragonwriter at 12:22 PM No comments:

The Master of Paths, the map. 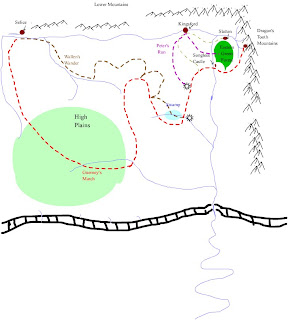 Here is the visual synopsis for the part of The Master of Paths which takes place in the Bardlands. It is also a rough schematic for the Bardlands itself. If you click on it, I think you will see an enlarged version of the map.

The Wizardslands are to the south, below the Shelf. The Shelf is a sheer cliff (that rough, wavy sideways ladder-looking thing) caused by a sudden uplift of the northern land. The uplift is highest at the Southwest Corner, creating the high plains and the rather odd flow to the rivers. The Eastern Green Forest is also on a high knoll, and the river coming out of the mountains splits, with one branch going north and one going west.

If you are wondering why Guerney takes such a long route to Selice, the royal city, the answer is that he needs to convince certain lords and nobles to join his cause.

While I don't have a good scale worked out for this map, I can tell you that it takes about a month to go south from Slatten to the Shelf, and five or six weeks to travel overland from Slatten to Selice. Going by river boat takes a lot less time, but it's expensive. Of course, the time it takes one to travel is affected by such things as weather, bandits, the condition of the roads, and the health of the horses. And riders -- eating last week's roasted meat may slow you down a bit. As a result, I can make the journies last as long as I need them to.
Posted by Dragonwriter at 9:26 AM 2 comments: